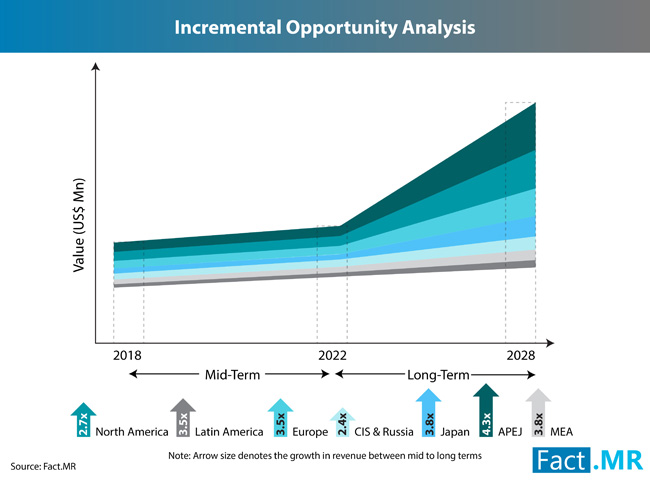 DUBLIN 2, Ireland, 30-Oct-2018 — /EPR ELECTRONICS NEWS/ — Fact.MR has announced the launch of a new research report offering in-depth assessment on global trends and developments influencing sales of RF power amplifiers. The comprehensive report on RF power amplifiers market includes an extensive compilation of acumen covering demand and sales projections in key markets. The report is available for direct purchase, however, readers can also avail a free sample of the report at,

Key Takeaways from the Report:

Demand for RF power amplifiers in cellular application continues to be on an upswing with sales likely to grow at a rate of 10% in 2018 over 2017. Growing cellular infrastructure worldwide remains instrumental in driving sales of RF power amplifiers. This aspect is complemented by increasing mobile internet subscriptions on the global front demanding higher speed output. According to ITU (International Telecommunication Union), in 2017, mobile broadband subscriptions touched a whopping 4.3 billion milestone with around 48 percent of the world’s population relying on mobile internet on a daily basis. In 2018, this number is likely to cross 4 billion, paving potential avenues for use of RF power amplifiers.

Cellular application remains the most attractive area for stakeholders in the RF power amplifiers market, with a 1.6x lead in sales over wireless infrastructure and over 2x over smart energy applications in 2017.

(Note: All values in the table are in US$ Mn)

To get more information about redacted figures, speak to our analysts

Sales of RF power amplifiers in Greater China are estimated to surpass US$ 600 Mn in 2018 – this being three times greater than those witnessed in India, the second lucrative market. Greater China’s position as one of the biggest technological hub continues on an upward path complemented by soaring demand for cellular IoT (Internet of Things).

Lucrativeness of India as the second largest mobile phone producer continues to influence the use of RF power amplifiers in the country. According to ICA, mobile phone production in India went up to 11 million units in 2017 from 3 million in 2014. This count is expected to further increase in the forthcoming years. FTTF (Fast Track Task Force) – a body operating under the Ministry of Electronics – has set a target of touching 500 million mobile phone production by 2019. Leveraging this aspect, stakeholders in the RF power amplifiers market are focusing on grabbing the untouched potential in the country.

To purchase the170+ pages report on RF power amplifiers market, click the below link: